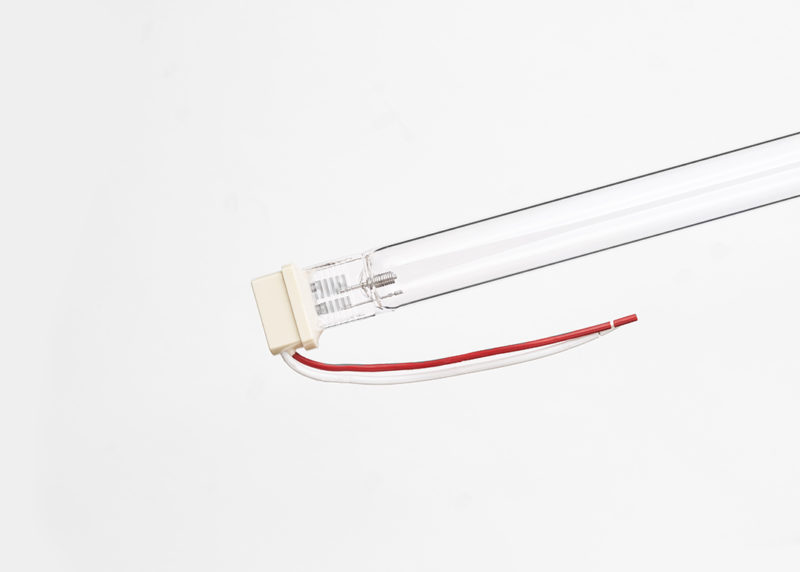 Alpha-Cure’s latest lamp design, the 4.0 Lamp, delivers two key benefits – it increases the operating lifetime of the lamp and it delivers cost savings to the business using them. The 4.0 Lamp contains 4 electrodes instead of the usual 2 found in a medium-pressure UV discharge lamp, which means the lamp can be switched to a very low power mode when it isn’t being used, instead of being switched off altogether.

To understand why this delivers such a key benefit, we need to look at the role electrodes play in a medium pressure UV lamp, what happens when lamps are repeatedly switched on and off and how this has been dealt with.

A medium pressure UV discharge lamps’ operation relies on an electrical discharge (or arc) forming between two electrodes supported in a fused silica (quartz) envelope.  This envelope contains the chemicals that are required for initiating/sustaining the arc and for producing the desired wavelength of UV radiation.

The electrical discharge is initiated by applying electrical energy to the electrodes such that it causes them to be of opposite polarity, resulting in the gases inside the envelope being ionised.  During this process, electrons emitted from the tip of one electrode flow across the lamp to reach the opposing electrode.

Why do electrodes impact lamp lifetime?

The electrodes in medium-pressure UV lamps are crafted from tungsten, a refractory metal suitably resistant to wear and temperature fluctuations,since it has the highest vaporisation temperature (boiling point) of all the elements. Despite these qualities, tungsten electrodes are susceptible to ‘sputtering’ during operation, particularly at high temperatures, which leaves deposits of tungsten inside the lamp envelope and eventually forms a build-up which prevents a lamp from effectively emitting UV.

The biggest surge of current (increased loading) on the electrode
happens at ignition, so this is when sputtering is most likely to occur. If a
lamp is constantly switched on and off, it will eventually have so much
tungsten on the inside of the quartz material that the UV output will be
compromised.

Alpha-Cure has designed the 4.0 Lamp so that the UV lamp will not need to be switched on and off. When the lamp is not in use, the power supply can simply be switched to run at low power, feeding to a pair of smaller electrodes in the lamp. This results in the lamp staying clear of tungsten deposits for far longer than a traditional mercury discharge lamp with just one pair of electrodes, saving the operator money on both power and replacement lamps.

As we are heading to the end of the year. It’s time to think about Christmas cheer. Here are some ...

Reflectors are a critical element of many UV curing systems, but their importance is often overlooke...

In response to our customer requirements our disinfection branch Alpha-Purify has introduced a range...

The Alpha-Cure’s UK office and factory will shut down for the Summer bank holiday.